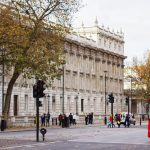 Home to Fulham and Chelsea football clubs, Fulham is an upmarket residential area known for trendy shopping streets like King’s Road and Fulham Road, which have chic boutiques, home-goods stores, and posh delicatessens and cafes.

The London Overground stops at West Brompton and Imperial Wharf.