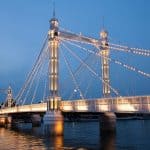 This fashionable village was absorbed into London during the eighteenth century. Chelsea’s King’s Road is a mecca for shoppers and diners offering an array of exclusive bars, bistros and boutiques. As well as a number of garden squares, Chelsea has several open spaces including Albert Bridge Gardens, Battersea Bridge Gardens, Chelsea Embankment Gardens, the Royal Hospital Chelsea the grounds of which are used by the annual Chelsea Flower Show. Stamford Bridge, home ground to Chelsea Football Club is just over the border in neighbouring Fulham.

The three closest stations are Sloane Square to the east, Gloucester Road to the north (both of these on the District and Circle lines) and Imperial Wharf for the London Overground to the west.