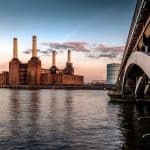 Battersea extends along the south bank of the River Thames. The area has undergone major property development over the last few years including new accommodation, events venue and brand new tube station in the former Battersea Power Station. Other landmarks include Battersea Arts Centre, in the former Battersea Town Hall; Battersea Park, a 200-acre green space home to a zoo and the London Peace Pagoda; The Royal Academy of Dance; Battersea Dogs and Cats Home and The London Heliport.

The area is well connected with three National Rail stations; Battersea Park, Queenstown Road (Battersea) and Clapham Junction which is also served by the and London Overground.

The London Underground is accessible via newly opened Battersea Power Station as part of an extension to the Northern line.