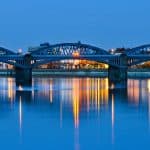 Barnes, in London Borough of Richmond upon Thames, is an affluent residential area with large, imposing Victorian and Edwardian houses.

Barnes Village is home to a number of independent boutiques and bistros, including the Olympic Studios which has two cinema screens a lounge bar and a fine-dining restaurant.

The Thames Path National Trail provides a public promenade along the entire bend of the River Thames, which is on the Championship Course in rowing.

Barnes has two railway stations, Barnes and Barnes Bridge and is served by bus routes towards central London and Richmond.